Through season and event, through blue sky and bright clouds, through the deep blue moonlit twilight of a summer evening, the town found it's center in front of Breaking New Grounds.

Over the years I found the location to be a place I returned to for my own sense of grounding.        To remember who I am, where I am and what I have to be thankful for.  To embrace the simple pleasures and to hear the sounds of my neighbors.  Locals and visitors coming in and out partaking in the ceremonial sounds of the clanking spoons and the swooshing and spurting hiss of the milk steamer. Breathing in the smell, most of all the smell, of freshly ground, freshly roasted and freshly brewed beans. 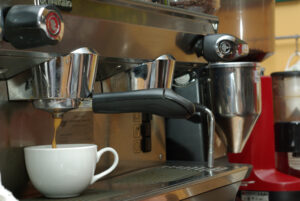 At one time the location was occupied by a real french style bakery,        "The Cafe Brioche". It was a likely spot for good pastry. Coffee and tea were served and swallowed. But it wasn't until it became the coffee house most recently closed that it became a place of community.

Local artists displayed their pictures on the walls.  Local baristas cut their first apron strings each Spring behind the counter.  Customers were moved quickly up the cue and came and went or sat and lingered. Outside on the brick common,  chairs and awnings attracted tourists and locals alike on foot or motor bike. They came to meet or to sit and stare at the passersby. Just to watch the general spectacle of summer revelers roaming into the square, appearing from around corners and down side streets, browsing for shops and stores to peruse. 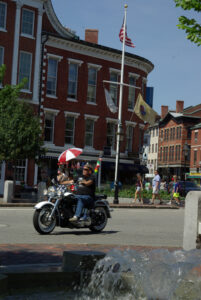 Night times after an early dinner, the sophisticated browsers would mingle and float arm in arm into the coffee house with it's warm yellow light and its laughter.

That energetic sound of evening coffee drinkers sitting and sipping with elegant slices of cake, creamy sorbets and caffeinated drinks on their tiny tables.  Smiles on their faces, eyes lowered into a book and brows knitted in thought.

It takes a village to fill the chairs of a successful coffee spot. 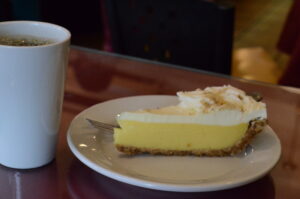